We’ve heard about “adaptogens” for decades, but what do they really do?

These natural substances are considered to help the body adapt to stressors (such as intense exercise) and help the body to exert a normalizing effect upon bodily processes. They can be considered biological “equalizers” if you will.

Numerous herbs have been proposed to have adaptogenic properties: Ginseng, Ashwaganda, Rhodiola, and of course, Cordyceps. Our focus today will be on the often mistaken and elusive Cordyceps.

Cordyceps is a genus of medicinal mushrooms whose various extracts can “sometimes” increase lactate threshold and aerobic exercise capacity, however this is depending on what study you look at.

Can a mushroom extract really improve mood, general health, and even athletic performance? Those who have been selling cordyceps, used in Traditional Chinese Medicine, have claimed these benefits (and more) for years.

But when it came to actual scientific research, success has always been hit or miss. One study goes great, the next goes flat.

So what’s the deal with cordyceps? Why has it been so hit-or-miss? Well it turns out that the researchers have been doing something wrong all this time!

There a few different forms of Cordyceps with the most popular one being Cordyceps Sinensis, (CS) Further, there were three strains that were first isolated. These strains were called CS-1, CS-2 and CS-3.

Finally, however, scientists isolated the “CS-4” culture of “cordyceps” in 1989.[12,13] Unlike the previous ones, this one was far more suitable for growing and thus research was now continued, the researchers knew that something was there – it just had to be isolated, and now thought they had the solution to their cordyceps isolation problem? But unfortunately they were wrong….. 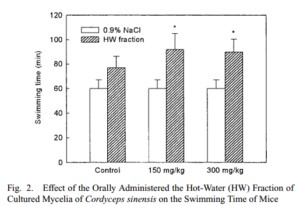 Cordyceps Benefits: Mice can swim noticeably longer with hot-water fraction cultured cordyceps sinensis.[1] Why doesn’t this always equate to humans, though, and how can we make it work??

Supplementation with cordyceps has been shown to increase physical endurance and decrease fatigue.[19] In one double-blind human trial, cordyceps significantly increased oxygen intake during exercise. Not only that, but it was also shown to decrease basal glucose and lactic acid levels. In a separate study, mice given cordyceps increased their swimming endurance from 75 to 90 minutes.[1]

Decreased stress levels
In the same study referenced above, the researchers also noted a change in the weight of the mices adrenal gland, spleen, thymus, and thyroid.[1] This indicated that the cordyceps users experienced less stress.

Current research suggests that it’s the cordycepin that seems to be the most active compound inside:

However the precise way in which Cordyceps works are still not fully understood. This is actually true for nearly all adaptogens – we simply haven’t fully understood the mechanisms of action for most of these ingredients, cordyceps included.

Where cordyceps sinensis fails and the research falls apart

As mentioned earlier, while there is evidence for its effectiveness via mechanistic studies, animal studies, and even some human ones, there also exist quite a few not so great studies done on cordyceps supplementation.

From one of those papers:

Time trial measurements did not differ between groups, nor did they change in response to supplementation. It is concluded that 5 weeks of CS-4 supplementation has no effect on aerobic capacity or endurance exercise performance in endurance-trained male cyclists. [27]

Another study had similar failings in terms of VO2 max and ventilatory threshold, [28]

Significant changes in metabolic or ventilatory threshold were not seen for the subjects in the placebo group after 12 weeks, and there were no changes in V̇O2 max in either group.[28]

So does it work or not?!

Up until now most of the research being done on cordyceps has been on Cordyceps Sinensis (CS) (remember CS-1 through CS-4). So how can one study look so good, and the next be a total flop?

The answer is simple! It turns out not all “cordyceps” is actually cordyceps!!

It turns out that the CS-4 scientists collectively thought was the “easy to grow” cordyceps… was not even cordyceps!! Much of it turned out to be the similar Paecilomyces Hepiali (PH)!

This fungus is part of a different genus and is not related to the Cordyceps Genus at all! [30,31] Yet it looks almost exactly the same, leading researchers to believe it’s just a derivative, at best.[32] With multiple sources of CS-4 being sold, it is absolutely possible some are actually PH, while some others are indeed CS. Simply put, nobody even knows. This explains why some studies looked promising and others flopped.

In short, just because it’s associated with or grows along with cordyceps, or indeed looks identical to coryceps, doesn’t mean that it is cordyceps! But for years, we were all collectively fooled, all to be saved by modern technology.

The simple answer to our problem to avoid any confusion, Skip sinensis altogether and go with cordyceps militaris instead.

Cordyceps militaris, however, seems to be the real deal, with new research showing improved VO2 max, peak power, and time to exhaustion.

So if you tried using cordyceps before and it didn’t work for you, or it didn’t work in the study, the reason for this is – misidentified raw materials.

Recently a new form cordyceps has entered the market: Cordyceps Militaris (CM), without the confusion of mistaken identity:

PeakO2™ may be an effective method for enhancing aerobic performance and delaying fatigue by improving oxygen kinetics. This could prove to be effective for maintaining and improving training volume, especially in endurance athletes.”[2]

In the above study, it was demonstrated that there was a significant increase in time to exhaustion. The researchers had subjects peddle at full speed for as long as they could, until they’d fall below a set resistance point. They then cut resistance out completely, let the subjects get speed back up, and then reintroduce the resistance again.

The idea is to peddle all-out maximal effort for three minutes, which is of course impossible, however these subjects added over a minuteto the time before resistance was cut.

This study was a randomized, double-blind, placebo controlled design.

Note, however, that PeakO2™ is a blend that’s led by cordyceps militaris, but has other beneficial mushroom constituents as well, which could definitely play a part in the success of that study.

Who is this for?

At the end of the day, any time you improve the body’s ability to use oxygen, it’s a good thing.

If you’re an endurance athlete, fighter, rugby player, cross trainer, footballer, tennis player or any performance driven athlete, or simply heading into a serious stretch of high-volume training, is PeakO2 something you should seriously consider? Absolutely!

PeakO₂™is clinically proven to decrease lactate and improve peak power, VO₂ max and time-to-exhaustion in 7 to 28 days. Its mechanism of action is the increased uptake and efficient utilization of oxygen. Because we get more ATP from oxygen than any other source, PeakO₂™is a fast-acting solution to ATP depletion. Additionally, its beta glucans and l-ergothioneine make it a free radical scavenger, limiting muscle damage. In other words, PeakO₂™can help delay muscle failure and its positive effects are felt nearly acutely, within one week if you load at least 28 grams.

PeakO₂ is a blend of six organic-certified adaptogens, all mushrooms.
It is grown on organic oats, not rice, so PeakO₂ contains the antioxidant beta glucans, as well as l-ergothioneine from King Trumpet.
Each of the six adaptogens are whole foods, not extracts.
Clinically-validated performance outcomes from a 26-subject study from a major US university.
Patent-pending formula.
Regarding why PeakO₂™ contains six adaptogens and not just Cordyceps Militaris, it’s best to go back to why muscles fail. Muscle failure can often be a combination of (1) ATP depletion (2) muscle glycogen depletion (3) excess hydrogen ions (4) and/or excessive free radical damage. PeakO₂™’s mechanism of action is increased oxygen intake and more efficient use of that oxygen. Thus, ATP is increased and fatigue is delayed. When various species are combined, synergies can occur that may also help delay muscle fatigue.

Cordyceps already has a positive reputation in the sports world, but a multi-species blend provides a wide diversity of beta glucan compounds that can elicit a more broad-based immune response. Although it may not show up in a short-term performance testing methodology, minimizing the depression of immune function that often occurs after strenuous exercise/exertion is very important in the sports world. Blends of mushrooms also provide a broader array of antioxidant compounds to counteract the additional free radical oxidative stress generated during sports activities.

Also, some of the most significant beneficial effects of un-extracted, full-spectrum medicinal mushrooms products can be related to their prebiotic dietary fiber content that fosters balance and diversity of the probiotic micro-organisms that comprise our microbiome. Having a collection of different species in PeakO₂™ broadens the diversity of micro-organisms.

In the 2015 PeakO2™clinical trial at the University of North Carolina, Chapel Hill, the subjects were tested for performance endpoints including Peak Power, VO2 max and VO2 time to exhaustion. The subjects took four grams per day and were tested at both seven and 21 days.

It seems that the body needs to reach a saturation point of 28g to 56g ( depending on individual levels of muscle mass etc.) before one can start to benefit from its effects, but 28g can be achieved with 4g per day for 7 days and then a maintenance dosage of 2g thereafter.

Below is a chart regarding beta-alanine and PeakO₂™. The data below the chart is preliminary clinical data in our dose-response study showing 2 grams of PeakO2 providing a significant decrease in lactate and significant increase in VO2 max and time to exhaustion.

The dose of PeakO₂™ is 1-2 grams, and you’ll see below that the goal is to get to at least 28g to see statistically significant gains in VO2 max, time to exhaustion and decreases in lactate. You can do that in one week at 4g a day or two weeks at 2g per day, for example. Or four weeks at 1g per day. Below the chart on PeakO2 versus beta-alanine is the preliminary data on our new dose-response study

Pre-workouts (stim or non-stim): PeakO₂ is clinically proven to significantly increase power, VO₂ max and VO₂ max time to exhaustion in just seven days. It does so by increasing the lungs’ oxygen uptake and efficiency. It’s like taking creatine monohydrate and beta-alanine, but getting results six weeks faster.

PeakO2™improves oxygen uptake, leading to significant gains in VO₂ max and VO₂ max time to exhaustion. Its combination with a muscle “fuel” like L-Leucine is a powerful muscle potentiator and athletic performance booster.

But if we also combined PeakO2™ with Beta Alanine and Creatine Monohydrate, now we REALLY have a performance boosting combination – this is exactly why PhD Nutrition combined these 3 well researched, proven and extremely effective ingredients in the PhD PRE-WKT PERFORM all fully dosed to ensure you consume the right dosages to enjoy the full effects as per research studies.

The Beta Alanine can work to delay muscle fatigue in exercises predominantly from about 1-10 minutes in duration. If the activity is in spurts in this time range, like soccer, rowing, or middle-distance sprinting, beta-alanine is ideal.

The Creatine as we know is for power. It’s an ATP donor, and clinically proven to improve power in the first 1-2 reps of explosive exercise, or even fast sprints.

PhD PRE-WKT PERFORM takes care of almost all of the vectors responsible for muscle failure during exercise, making it the ideal fully dosed pre workout solution for those who are looking to improve their performance, on the field, in the ring, on the road, in the gym.

The right recovery is crucial if you want to improve your physique, sports performance, or health. Check out our top 5 recovery supplements.

Support your body from wake-up to bedtime with our complete guide to a day’s supplement intake.

Find out all you need to know about fat burners.